Today’s article is brought to you by the letter C. 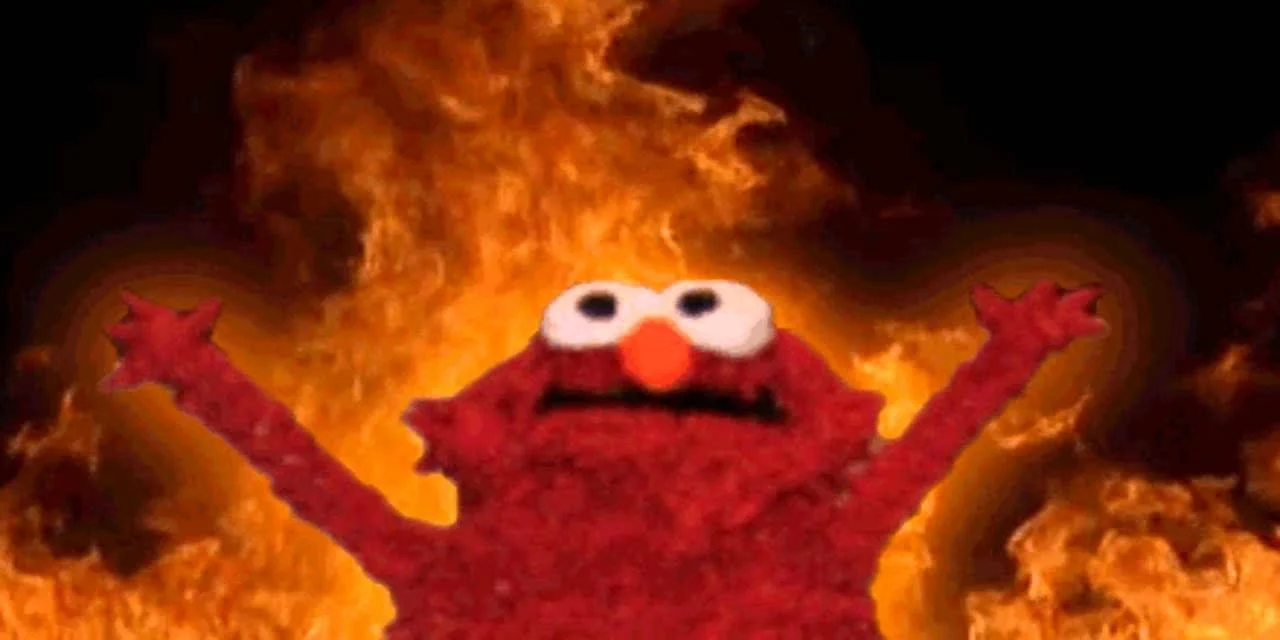 Can you guess what the C-word is?

That’s right! The C-word of the day is COLLOCATIONS!

Can you tell Elmo what collocations are?

That’s right! Collocations are the habitual juxtaposition of a particular word with another word or words with a frequency greater than chance!

Okay enough of THAT.

Simply put, collocations are groups of words that are commonly used together. Kind of like clichés or idioms. (The internet likes to say collocations are different from clichés and idioms, but diving down that rabbit hole gets confusing FAST, so we’re going to keep it simple and consider them the same thing.)

…You get the idea.

Commonly used phrases, that are normally boring conversation fillers, present an opportunity to get attention. You just had to add a twist to the end.

Why don’t I just show you what I mean.

This technique was fire for Dice. Notice how the audience goes wild for them, and even MEMORIZED them. (And if you’ve never seen Dice before, aren’t you in for a treat.)

An attention-grabbing technique is to take a common phrase, colloquialism, idiom, collocation, etc and change the ending to something unanticipated. This raises awareness, because it sets up an expectation, then shatters the pattern.

Your brain is an expert at pattern recognition. When your meat-computer senses a pattern it’s familiar with, it can safely ignore that pattern.

If you were to shatter that pattern, your brain snaps into focus. It better pay attention, because thousands of years ago when we were living in caves and dragging our knuckles on the ground, new things were potentially dangerous.

Caveat: Clichés  are only attention-worthy if they are NOT used traditionally.

The only appropriate time to use a cliché is if you are either making fun of it, or putting your own twist on it.

Clichés are overused by definition. Our brains have seen them all before, so we are conditioned to ignore them. They are benign. We know that pattern.

But if you shatter that pattern, then you are more worthy of attention.

A killer way to shatter patterns is with one-liner jokes. This technique is highly effective at catching and holding people’s attention. And they are DIFFICULT to get right.

Looks easy on paper. But it’s not. It’s HARD. There’s a whole lot happening between #1 and #2.

One-liners are so effective at misleading us because the setup and the twist happen incredibly fast like a one-two punch. The setup is designed to lure us into a false sense of security; we think we know where they’re going.

One liners can start with an observation, statistic, fact, universal truth, piece of advice, opinion, or a short story.

Let’s look at a few examples. The setups are in bold, the twists are in italics.

Life is like a box of chocolates. It doesn’t last long if you’re fat. – Joe Lycett

Some good examples of universal truths are proverbs.

Try Googling the most famous proverbs and come up with your own twist or angle. How could you give the proverb a second, unintentional meaning?

“An apple a day keeps the doctor away.” How else can you interpret this? What other ways would an apple keep a doctor away? Do you throw it at them? Shove it in their car tailpipe? Is an apple a day the only healthcare plan you can afford?

Here’s a list of 50 proverbs to get you started. Pick a couple and try giving them alternate interpretations.

This blueprint is easy to practice. Replace the stat with another stat, and add a twist to it.

Skim some headlines in the news.

Ask yourself, what is this headline leading me to assume?

Watch late night monologues; their jokes use this structure.

I wish people would stop making fun of fat people. They have enough on their plates. – Eddie Murphy

What opinions can you think of that everyone generally agrees on, and how can you add a twist that either negates that opinion or highlights it from a weird angle that people wouldn’t expect?

Piece of advice one liner:

Ladies: Don’t come off desperate and reply quickly to your crushes texts. Wait a while. Meet someone else. Get married. Start a family. Keep him guessing. – Violet K. Benson

What pieces of advice have you heard, and how can you turn them around? A lot of common life advice can also be found in proverbs. But there’s also tons of common advice out there about life, personal development, dating, fitness, finance, work, parenting, etc. How could you “misinterpret” that advice to give it a different context?

I was on a date with this really hot model. Well, it wasn’t really a date-date. We just ate dinner and saw a movie. Then the plane landed. – Dave Attell

First we thought Dave was telling us a story about going to dinner and a movie with a model. The twist, in four simple words, completely changes the entire context for us. He’s just another chud on a plane.

What experiences can you think of that most people would love to encounter? Like winning the lottery, staying at an all-inclusive resort, flying first class, going on a date with a model, getting VIP access, etc. Feed ‘em a dream, then bring them back down to earth.

Jack Handey had a good example: “One thing kids like is to be tricked. For instance, I was going to take my little nephew to Disneyland, but instead I drove him to an old burned-out warehouse. “Oh, no,” I said. “Disneyland burned down.” He cried and cried, but I think that deep down, he thought it was a pretty good joke.

The twist completes the story for us, but not in the way we were expecting. It crushes the assumption created by the setup.

Dave Barry has a ton of great one liners. It helps to read one liners to get familiar with the rhythm of how they’re supposed to feel.

Another way of getting the hang of one-liners is watching them.

Exercise #1: Watch each video all the way through, then go back and watch it again. But the second time, pause after each joke and analyze where the expectation was set up, and how it was shattered.

Using the same premise, try adding your own twist. Isolate the verbs, nouns, and adjectives, then substitute them with alternatives. This helps preserve the joke structure, while practicing at making it your own. Shatter the pattern in a new and different way.

Exercise #2: Which jokes made you laugh the hardest? (If any? Maybe you didn’t laugh. If you didn’t find any of that funny, I left an apology for you at the bottom.) What was it about them that hit you so hard? Was it the grammar, tone, pronunciation, word choice? Was it something physical, in their facial expressions or movement? Make note.

How Brands Use One Liners:

“But Asia, we is not comedians! We is businesses!”

Oh stop it. You don’t have to be a comedian, but you definitely should be paying attention to comedians. They’re a masterclass in how to distill information into highly memorable stories.

If you’re still wondering how to incorporate one liners into your marketing, here’s a few examples of brands that have nailed it:

I know, using Durex as an example is like cheating. It’s almost impossible NOT to make jokes about a condom brand. So here’s some other, more traditionally “boring” brands that made themselves exciting using witty wordplay and one liners:

The country of freaking Finland:

Even Porsche got jokes:

If a little autoparts shop can do it, so can you:

The Economist’s White Out of Red campaign:

The Economist’s white out of red campaign increased subscriptions by 95%, skyrocketed revenues, and won them numerous awards over the 14 years they ran it.

All with witty wordplay and one liners.

If companies that sell freaking HIGHLIGHTERS can make their ads entertaining, you can too. You just have to put some muscle into it.

…or you could let us do the heavy lifting. It’s what we were born to do.

Fishing for laughs is useless if you don't know how to f*cking fish. That's where I come in. My wheelhouse is humor. Get on my boat 'cause we're gonna go catch some fat tunas.

Thanks for stopping by, we have some awesome things to show you. Our website uses cookies (not “real” cookies, but we like those too) and they help us know where our visitors are coming from and how we can make our site better. Help us and our customers by clicking accept to all cookies. We will never store or share any of your personal information on our site.
Cookie settingsACCEPT
Manage consent

This website uses cookies to improve your experience while you navigate through the website. Out of these, the cookies that are categorized as necessary are stored on your browser as they are essential for the working of basic functionalities of the website. We also use third-party cookies that help us analyze and understand how you use this website. These cookies will be stored in your browser only with your consent. You also have the option to opt-out of these cookies. But opting out of some of these cookies may affect your browsing experience.
Necessary Always Enabled
Necessary cookies are absolutely essential for the website to function properly. These cookies ensure basic functionalities and security features of the website, anonymously.
Functional
Functional cookies help to perform certain functionalities like sharing the content of the website on social media platforms, collect feedbacks, and other third-party features.
Performance
Performance cookies are used to understand and analyze the key performance indexes of the website which helps in delivering a better user experience for the visitors.
Analytics
Analytical cookies are used to understand how visitors interact with the website. These cookies help provide information on metrics the number of visitors, bounce rate, traffic source, etc.
Advertisement
Advertisement cookies are used to provide visitors with relevant ads and marketing campaigns. These cookies track visitors across websites and collect information to provide customized ads.
Others
Other uncategorized cookies are those that are being analyzed and have not been classified into a category as yet.
SAVE & ACCEPT